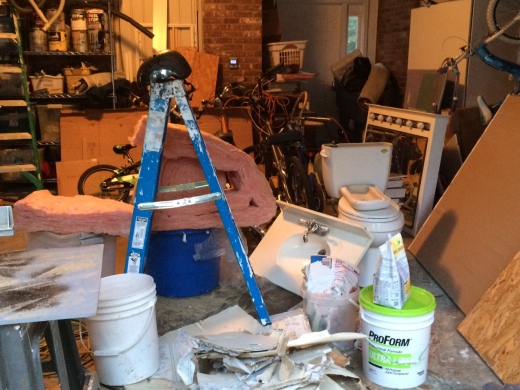 From a wife who has experienced great difficulties in her marriage and has continued to abide in Christ:

You know, I was cleaning out our garage today (part of me working on my own habits), and it taught me some lessons. One was on that question that always pops up…

“How do I respect my husband if he doesn’t deserve it?”

So my husband likes his stuff. He has boxes of stuff that he never touches and won’t part with. Much of it sits in our garage, but he is often aggravated by the messy state of our garage, as am I. God has been speaking to my heart about the appearance of my home and my physical appearance. That it would convey respect to my husband if I kept up with these things. And, we’d all be happier.

So I cleaned and organized and donated for 5 hours today. And in the end, the garage looked 100x better. But – a good 30-40% of the floor space is still covered with his stuff, stacked and arranged as it may now be. Old books, DVDs, exercise equipment, etc.

It’s not as good as it could be. And, it’s his stuff to clean up. Only he can do it.

And so goes respect. You can and should clean that up and keep it up the best you can. It’s 100x better than a disrespectful relationship. But. If he still has junk (sin) to get rid of, it will prevent both of you from enjoying the beauty and freedom of a truly working, effective environment. One that is in order–as it should be.

But I’d say the chances of him cleaning up his stuff now that I’ve cleaned the rest of the garage are much much greater! I mean, it’s not all scattered around and mixed in with all the other stuff. It’s a clean, neat garage with a big pile of stuff in the middle!

And that is just what happened to us as I tried to respect him. After about a year and a half, he really hit his bottom, and really was not able to blame anyone for his poor choices.

Respecting a man in sin is quite, quite difficult. Kind of like cleaning a garage around a big pile of junk you know will still be there for an indeterminate amount of time afterward.
But, I’m still so very glad I did it. The respect and the garage. 🙂 It was the right thing to do.

Why Do I Have to Change First?